With $17,500, Frances Madden’s CD Project was the recipient of the by far largest chunk of funds from the $SESI 100,000 Project Fund at the 15th World Congress in Freiburg. A number of others also received the full amount, but were considerably less in comparison. 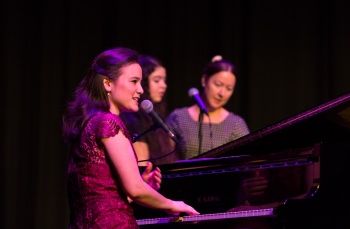 Since then, a number of people have been curious as to why this project in particular received so much. As I myself was not a member of the jury, I asked a couple of them - specifically Andrew Holloway and Hammond Peek - to give me some feedback to share with the curious. I summarise here:

Frances Madden has the solid beginnings of a music career in Australia already under her belt, and is now ready to move into the US market. She has upped her professional support, including a US producer in Nashville, Tennessee. Her budget for recording a new album is $60,000, of which Frances and her family had already raised a significant portion. $20,000 was what she requested from the Fund.

“The judges noted that Frances was already receiving solid, professional, experienced input from her Australian and USA producer contacts, and thus we agreed that with a full album, rather than with just a few tracks, she would stand a far better chance of breaking into the lucrative US music market, thus we awarded her $17,500.”

Frances received an additional $2500 anonymous donation towards the project.

Considering Frances’s proven, professional commitment to her music, as well as her involvement with and commitment to Subud, the jury decided that this was certainly one project with real potential that would benefit from major support.

Frances has just returned to Australia from Nashville and writes:

"With the help of the SESI grant, which I was awarded at congress in July, I’m very excited to be going into the studio mid-December to complete the recording of my second studio album. I’ve recently just returned from a self-funded trip to Nashville Tennessee, where I spent 8 days writing with two well-established songwriters. We worked on current and new material for the album and I also experienced my first Thanks-giving true Southern style! It was a productive trip and one of the resulting songs is on the list of contenders for the album.
In the next two weeks I’ll be travelling between Sydney and Melbourne, working with my producer Chong Lim on refining musical arrangements and rehearsing the band. We’ll then be recording the bulk of the tracks in Sydney and Melbourne between 16th and 23rd December. After a break over Christmas we will continue adding extra instruments and overdubs (backing vocals, horns) and do the mixing, with the hope of finishing everything by late January. We’ll then shop the album to a few record labels with the help of a few industry contacts and aim to release in May / June 2019.
I’m so grateful to SESI for their support and making this project possible. I’m very excited to work with the great team we have assembled and can’t wait to share the new music with everyone."