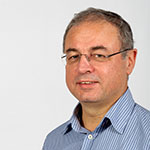 A special project intended for Toronto
By Harman Scott Based in Perth, Scotland, Harman is a UK architect with over 40 years’ experience designing buildings and managing projects, throughout the UK and in Ireland.

This is a brief summary of my journey in bringing into reality a clear receiving in a kejiwaan workshop in 2001 on ‘my right work’, however the story began much earlier…

In 1998, I first received, when visiting Toronto, an indication of a sacred space. There were only a few basic hints about its purpose and its architecture.

Almost 20 years in the making therefore, my dream has been to create a sacred space which helps everyone find inner peace. This space is also a meeting hall, to be used to promote inter-religious understanding, respect for human rights and equality.

In 2011, at the end of a kejiwaan workshop at UK Congress on my right work, I received a clear image of what I have since named ‘World Visioning Space’. The design is based on sacred geometry. Over the next three years, I worked on it in an outer way from time to time, but not really knowing how it would develop.

In 2014, I receiving much clearer clues, and was by then striving to work out how ‘WVS’ could become reality. It became clear that I was simply to concentrate on it, develop it in an outer way and share it. Further clues at this time confirmed that to best fulfil its purpose, it should be built in Toronto, Ontario, and known as the interfaith capital of the world.

In November 2014, in Perth, Scotland, I was offered the opportunity by a business networking group of making a public talk of 20 images for 20 seconds each, on a subject I was passionate about. I chose ‘WVS’ and in April 2015, I made that first public presentation to them. The concept was well received and created much interest. I was inspired to make two visits to Toronto, in July and October.

Motivated further by the reception it received, in 2016, I visited Toronto twice more, making more contacts, spreading the word about the project, and to look for possible sites. Each trip I made was more successful than the previous one. In sharing it with many people, I realised that the project has worldwide significance. It is simply what people tell me, however I am aware of this from receiving too.

I have discovered that the project has grown as I have. I have to evolve first, for the project to develop, i.e. this project is a vehicle for my spiritual development too.

Since 2015, the proposal has been presented personally to over 300 people in North America and Europe. In Toronto itself, it has been seen by many individuals, representatives of religious, interfaith and spiritual organisations, plus several representatives of the Ontario Province and Toronto City Council. Very strong interest has been gathering. It is now time to share it as widely as possible. A strategic plan to build it is being developed. The project unfolds.

I am at the end of another visit to Toronto, and forming a visionary team to bring it into reality. There are three stages. I am at stage 1, which is to for this team to seek seed funding to bring it to the attention of serious funders and potential benefactors who will acquire the land and the build it. There are very exciting developments from this trip that I will share later, when they are confirmed formally.

My experience to date is that the images and description of the sanctuary resonate in deep and spiritual way with many people, of all backgrounds. The written description is simply commentary. I have experienced many open doors for the project, one after the other. I had to do the work, though. It did not move each time until I did.

I give grateful thanks to everyone who has been very generous with their time and energy in suggesting ways to take it forward, and helping me by working for its success.

I also have PDF that can be emailed, of a brochure that contains much of the information on the website.

If you or anyone you know would like to help in any way bring this project into reality, or would simply like to receive an occasional email update on progress, please email me at harman@visioningspaces.org I also ask that you send good wishes and prayers for this project to become reality.